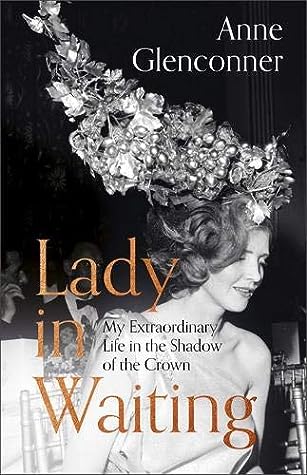 Lady in Waiting: My Extraordinary Life in the Shadow of the Crown

An extraordinary memoir of drama, tragedy, and royal secrets by Anne Glenconner--a close member of the royal circle and lady-in-waiting to Princess Margaret. As seen on Netflix's The Crown.
Anne Glenconner has been at the center of the royal circle from childhood, when she met and befriended the future Queen Elizabeth II and her sister, the Princess Margaret. Though the firstborn child of the 5th Earl of Leicester, who controlled one of the largest estates in England, as a daughter she was deemed "the greatest disappointment" and unable to inherit. Since then she has needed all her resilience to survive the vipers of court life with her sense of humor intact.


A unique witness to landmark moments in royal history, Maid of Honor at Queen Elizabeth's coronation, and a lady in waiting to Princess Margaret until her death in 2002, Anne's life has encompassed extraordinary drama and tragedy. In Lady in Waiting, she will share many intimate royal stories from her time as Princess Margaret's closest confidante as well as her own battle for survival: her broken-off first engagement on the basis of her "mad blood"; her 54-year marriage to the volatile, unfaithful Colin Tennant, Lord Glenconner, who left his fortune to a former servant; the death in adulthood of two of her sons; a third son she nursed back from a six-month coma following a horrific motorcycle accident. Through it all, Anne has carried on, traveling the world with the royal family, including visiting the White House, and developing the Caribbean island of Mustique as a safe harbor for the rich and famous-hosting Mick Jagger, David Bowie, Raquel Welch, and many other politicians, aristocrats, and celebrities.

Readers Also Enjoyed Lady in Waiting: My Extraordinary Life in the Shadow of the Crown

The Mountbattens: Their Lives & Loves

Future Fit: How to Stay Relevant and Competitive in the Future of Work

The Importance of Being Aisling: Country Roads, Take Her Home

Lady in Waiting: My Extraordinary Life in the Shadow of the Crown Reviews

Reading Reconstruction: Sherwood Bonner and the Literature of the Post-Civil War South Texas Splendor The War of Darkness Polarity #2 Griekse mythen For 100 Nights Comfort Woman Never Let You Fall The Iron Door Mine The European Reformations

Anne Veronica Tennant, Baroness Glenconner is a British peeress and socialite. The daughter of the 5th Earl of Leicester, Lady Glenconner served as a maid of honour at the Coronation of Elizabeth II in 1953, and was Extra Lady-in-waiting to Queen Elizabeth II's sister, Princess Margaret, Countess of Snowdon, from 1971 until the Princess died in 2002.